In 1930, Major Cyril Windeler came up with the original idea for the Round the Island Race. He suggested a handicap race around the Isle of Wight which would cater for smaller boats – category 5 to 25 tons. The first race in 1932 had just 25 entries and it was one of the smaller boats which won. A 22 foot Cornish fishing boat “Merry Conceit”, bought from a builders in Looe for £45.

The Isle of Wight is situated off the south coast of England. The course taken is shown on the map: 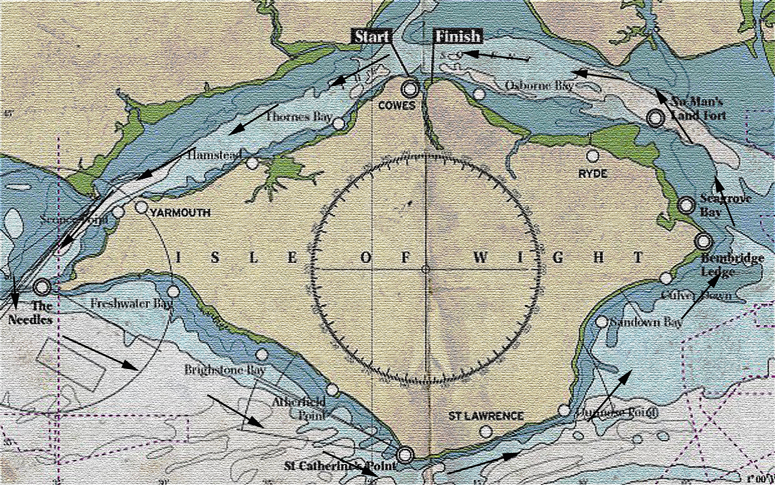 This year sees Cloudy Bay  sponsor the event for the last time and competitors from all over the UK, Europe and the USA will follow the 50 nautical mile course for one day only round the Isle of Wight. The race regularly attracts over 1,700 boats and around 16,000 sailors, making it one the largest races in the world and the fourth largest participation sporting event in the UK, second only to the London Marathon and the Great North and South Runs.

The date of the Round the Island Race each year is generally chosen to be the Saturday in June for which the tides are most favourable for the race. Occasionally, a date in late May or early July may be chosen, and in 2017, the date is Saturday July 1st .

Waiting to cross the line at Cowes, eleven separate groups start every 10 minutes from 0700 until 0840 and head in a westerly direction towards Yarmouth. The boats pass round the Needles Lighthouse, along the south-west coast of the Island to St Catherine’s Point and then up across Sandown Bay to round the Bembridge Ledge Buoy. The fleet then makes its way either side of No Man’s Land Fort and across Osbourne Bay to the finish line at Cowes.

A training day is usual and this year it will be on the 1st, followed by the race on the 2nd and if you are fortunate to win one of the 60 prizes awarded during the event you will be sailing for home on the 3rd, however with the Cowes party scene, the fireworks and Red Arrows display it is worth sticking around and enjoy the camaraderie over the weekend.

Spectators can also be part of this eye catching event and will find many vantage points, both on the mainland and Isle of Wight to watch the race progress. You will be watching world-renowned sailors racing against first time racers and families and although the majority of the fleet will take many hours to complete the race, the course record stands at 3h 43m 50s for a monohull boat, set by Mike Slade on ICAP Leopard in 2013 and 2h 52m 15s for a multihull boat, set by Sir Ben Ainslie on J.P. Morgan BAR also in 2013.

Any cookies that may not be particularly necessary for the website to function and is used specifically to collect user personal data via analytics, ads, other embedded contents are termed as non-necessary cookies. It is mandatory to procure user consent prior to running these cookies on your website.